Wimbledon Through the Eyes of a Non-Tennis Player

When I was in college I started dating a tennis player. I had never dated any kind of athlete before, since my crowd was made up of singers, artists, poets, writers, and musicians. I wasn’t completely ignorant of sports, though. I knew they existed. I knew there were such things as points and goals and fouls and coaches. I knew they always began with the National Anthem.


The day came. Scott’s plan was to ride the tube to Wimbledon, get there about 2 pm and set up our tent in the queue. His goal was to get there early enough that we would get Center Court tickets because Center Court was the only show court that had a retractable roof in case of rain. That way if it rained we would still be able to watch tennis when all of the other 14 or so courts would be closed. Plus, Center Court was where they put all the big stars.
Interesting Tennis Fact: There are three types of tennis courts: hard court, clay court and grass court. You can’t play on any tennis court in the rain; puddles form on hard courts, clay gets muddy and grass gets ripped up. When this happens balls don’t bounce. After it rains you have to wait forever for the court to dry out before you can play again. At Wimbledon, the moment it starts to rain they pull a huge tarp over the lawn to protect the grass. It takes them anywhere from 22 to 28 seconds to do this. 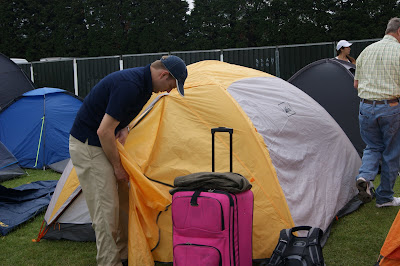 We finally made it to the big lawn where we were to “queue up.” They told us where to put our tents; snug up against the tent of the people who arrived right before us.I could tell Scott was relieved to finally be in line, and from the looks of it we were near the front, but we still wouldn’t know if we’d get Center Court tickets for a few more hours. Before too long the queue had spread out behind us, too, in a long colorful row of neat tents full of people smoking, drinking beer, throwing tennis balls to each other and speaking dozens of different languages. Believe me, we were totally at home. :) 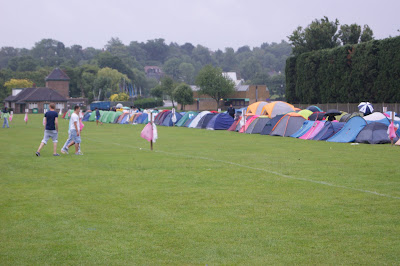 True, this was not our norm, especially for Doug and Val, but let me add here, that the tennis crowd is a refined group of sports enthusiasts. I would seriously hesitate, for instance, to sleep all night in a queue for a hockey game or even a basketball game. But tennis is different. It is a sport that is synonymous with respectability. The officials (called “stewards”) making sure we were behaving were mainly retired old gentlemen, dressed in suits and ties, strolling the queue with umbrellas. 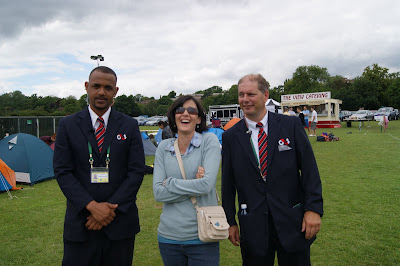 Free pastries were passed out along with coupons for free strawberries and cream. Unlike most sports, tennis appeals to your inner lady or gentleman and not your inner animal. When football is on tv the commercials are full of beer and scantily clad women, but tennis is sponsored by companies like Mercedes Benz and Rolex. Game of tennis is built on the tradition of sportsmanship and fairplay and decency. The whole sport can be summed up in the word “proper.” 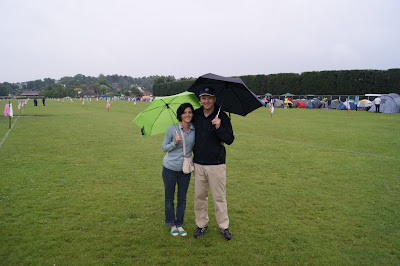 Interesting Tennis Fact: Tennis ball cans are sealed to keep the balls “fresh.” Once a tennis ball is about a week old it is dead, and doesn’t bounce as well. For tournaments they always start with a fresh can of balls and change balls after every 8 games. Not every 8 matches. Not every 8 sets. Every 8 games. That means very little to you unless you understand tennis, though. Think of it this way: for every match the players will go through about 8 cans of tennis balls.
So we had no problems enjoying the company of our international compatriots and British middle class as we discussed the low-lying grey clouds and munched Pringles and chocolate chip biscuits. We also spent hours playing card games with Scott’s parents (of which I lost almost every round. That is what you get when you marry into a competitive family). Scott’s only but often uttered complaint was that he wished he were in a hammock instead of a tent. (We can’t have it all, darling.) 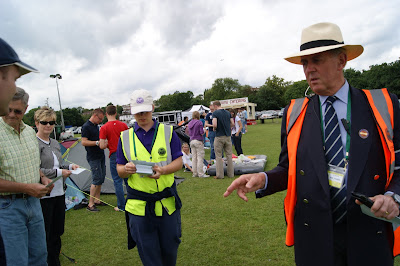 Finally a steward came with a stack of queue cards and to Scotty’s relief we were in the top five hundred (top two hundred, actually, thanks to Scott’s eagerness), guaranteeing us a seat at Center Court. Now, even if it rained, his dreams of seeing the best tennis players in the world with his dad were about to come true. 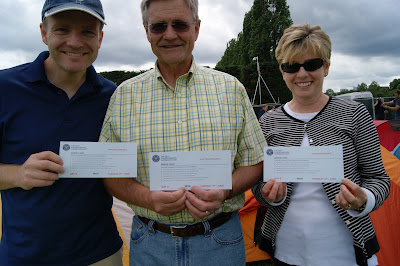 Just look at Scott's grin. That makes me happy. 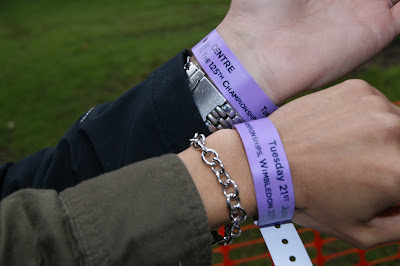 After a night of little sleep we woke to the sound of tent poles being folded up. The sun was blinking over the horizon (the sun rises at 4:30 am there) and people were everywhere, gathering their things, dropping off the big bulky items in a storage facility, and trying to make themselves look decent enough to be on international television. Before long, mass confusion had now organized it self into a “proper” queue. Now it was time to stand. 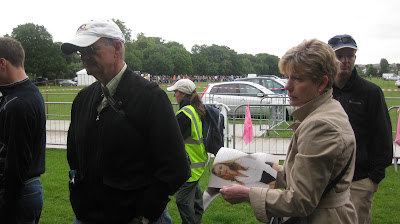 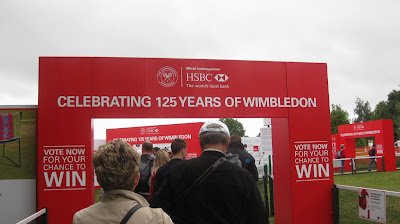 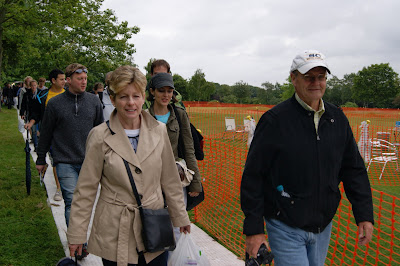 and every now and then we'd walk.

We stood in line, inching forward for the next three hours. Finally we reached the gates at Wimbledon, and at 12:30 we were let into the grounds. We had been in the Wimbledon queue for 22 hours. (Round of applause to Doug and Valerie!) 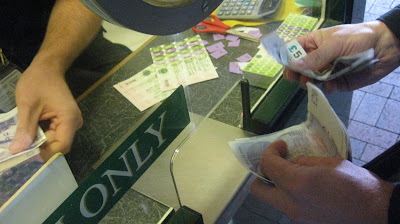 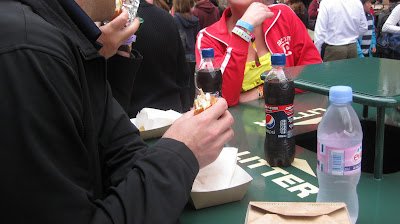 We enjoyed a nice lunch, standing around a very nice garbage can/table, since all the tables in the inn were full. Then it was off to Center Court. 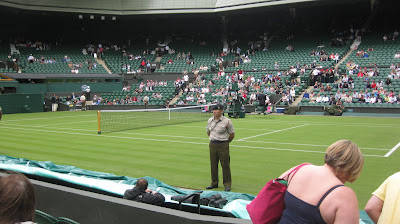 Interesting Tennis Fact: at the Wimbledon courts, even the “show” courts that are often televised, there are no sponsors’ posters for you to oogle at during the game. There is nothing to distract you. That is because Wimbledon is not about what they can sell you or what kind of advertising will catch your eye. At Wimbledon it is all about the tradition, the glory and the game of tennis. And that is also why they charge a ba-jillion dollars for tickets.


I have to admit even Valerie and I got a little giddy as we walked into the stadium. There it was: the dark green seats, the emerald-colored lawn, mowed to perfection, the ball kids standing at attention like little soldiers. It was just like we had seen it for all the years of our married lives, broadcasted on tv. Except now we were here! And we didn’t even play tennis! Ah, the irony of it all. 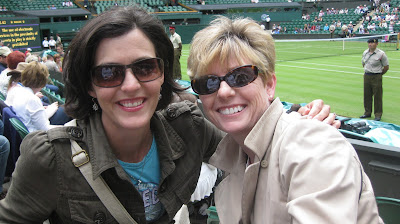 All around us were more wealthy spectators who didn’t have to camp because they had the means to buy the 800 pound (that is approx. $1000) tickets to this event and looked markedly more fresh and glamorous. There were many people sitting in the royal box, including Diana Ross who came specifically to enjoy Serena Williams play (of “Ain’t No Mountain High Enough” fame for all you athletes). 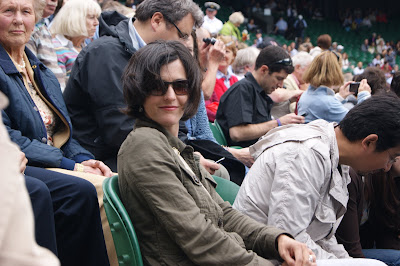 I asked Doug and Scott if they would stand in line with Val and I for 22 hours to watch….say…Oprah (I can’t think of anything I’d stand in line for, particularly not Oprah, but I couldn’t think of any other example). I got no response. Perhaps that is because that would be their ultimate nightmare or perhaps it was because Serena Williams had stepped on to the court. Boisterous—but polite—cheers erupted from around the stadium. Serena and her opponent warmed up for a moment or two. Then a hush fell over the court. It was time to begin. 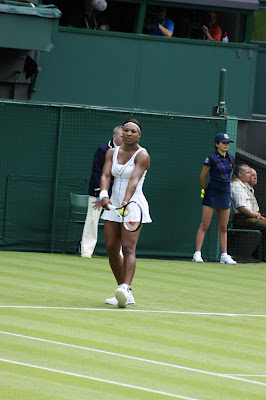 Our well-earned seats were excellent. We were six rows from the court, and from where I sat I could see straight down the base line. (I had a perfect view of the base line judge who shoutedFAULT! each time Serena foot-faulted on her serve. Luckily she didn’t threaten to “CRAM TH[AT] beep-beep BALL DOWN [HIS] beep-beep THROAT,” though.) One of the most interesting things about tennis is that it is a quiet game. You are not allowed to talk or make noise or clap or shout or whistle until after a point is made. An unexpected exhale at an excellent shot or an involuntary gasp at a close call is allowed, but for the most part, the disciplined audience is pin-drop silent. So silent you can hear the sound of the ball kids’ sneakers as they scamper across the lawn. So silent you can hear the clicking of a camera three rows away. So silent that the chair umpire looks at me when I chew my mint.
Interesting Tennis Fact: Most tournaments let the athletes where whatever color they want, but at Wimbledon the athletes can only wear white.
It was glorious watching Serena and Aravane Rezai play in their Wimbledon whites. Standing back, and looking at the entire scene, they are the only ones dressed in white—the officials and ball kids, security guards, audience are all in darker colors. Their white skirts against the dark green back drop of the stadium and the lighter green of the lawn almost made them seem like angels. Very big, strong, and tank-like, but still like angels. 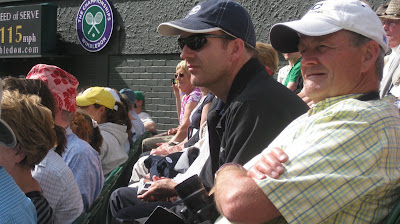 Doug and Scott in heaven.


Serena beat Rezai soundly (though she cried afterwards into her towel. Rough year, I hear.) Then we watched Roger Federer stroll out onto the court, waiving his hand like Julius Caesar. Everyone went (politely) wild. 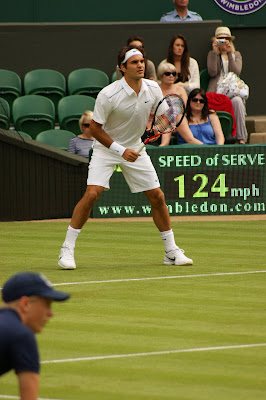 Watching Federer play is like watching a magician. Instead of simply reacting to the other person’s shot he calculates the speed and direction of the ball as it is coming towards him and then with his racket he deflects it back, making it twirl and dance, hitting just the right angle at just the right speed to the very place where it will inflict the most wonder. If Apollo played tennis he would look just like Roger Federer. If Michelangelo’s David could move he would move like Roger Federer. To give you an idea of how famous he his, his name didn’t even come up on my computer’s spell check. That is fame, brothers and sisters, even if you yourself don’t know who in the heck he is. 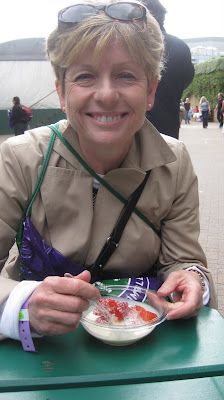 During breaks Val and I went out for strawberries and cream. 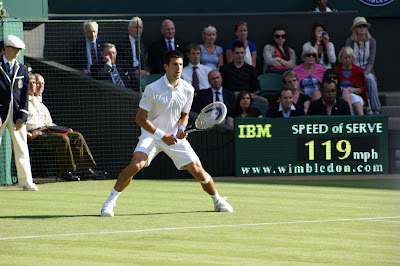 more tennis (this is Djokovic), 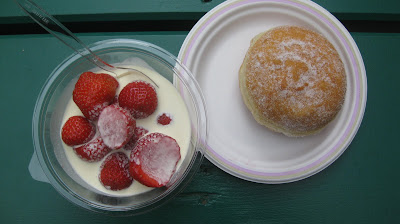 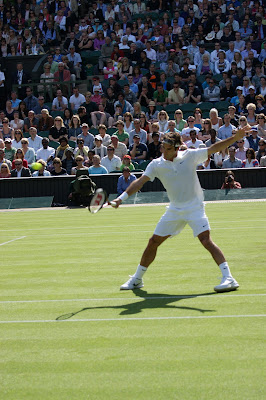 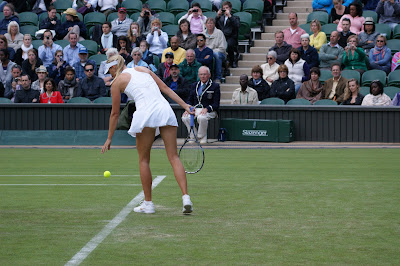 Last on the schedule for Center Court was Maria Sharapova whose Amazonian grunts used to intimidate her opponent are comical when watching TV, but are down right terrifying in person. She even frightened even me. She is one scaaaaaary woman.
All in all, we saw four of the most famous tennis stars in the world wipe the first round clean as they ascend to Wimbledon glory. It is hard not to be intimidated by these gods of tennis and wonder to yourself if I had not applied my self more at something could I have been as great? But just when I get these thoughts that people like Roger Federer and Serena Williams are beyond human I look down at their feet and remember that their socks smell just as bad as anyone else’s. Or worse. 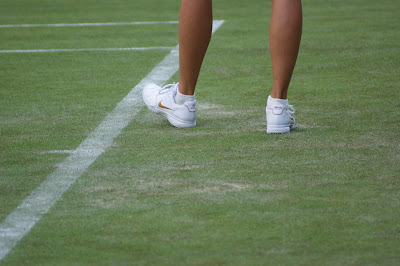 Maria Sharapova's feet
So we came, we saw, we ate our strawberries and cream and we left. We arrived at our hotel bearing sunburns, blood shot eyes and massive headaches. But we had a glorious time, and I highly recommend the experience to anyone….even if you don’t know anything about tennis. But if you can’t get there, there will be more Wimbledon drama you can watch on your telly for another week and a half before the championships are over.
The moral of the story is: marry an interesting person with an interesting hobby and you’ll never be bored.
Cheerio!

I am the daughter of a fireworks salesman and Miss Malibu. I am the wife of a Duke professor and together we are raising five piranhas.